How could that be?
Cooking the books in DC?
Not exposing the truth?
U.S. debt jumped a record $328 billion on Thursday, the first day the federal government was able to borrow money under the deal President Obama and Congress sealed this week. The debt now equals $17.075 trillion, according to figures the Treasury Department posted online on Friday. 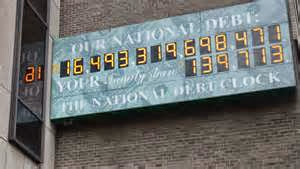