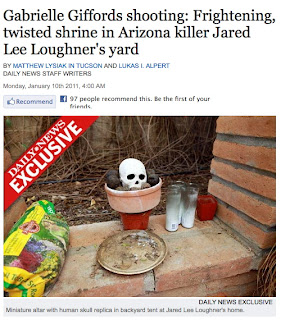 A sinister shrine reveals a chilling occult dimension in the mind of the deranged gunman accused of shooting a member of Congress and 19 others.
Hidden within a camouflage tent behind Jared Lee Loughner's home sits an alarming altar with a skull sitting atop a pot filled with shriveled oranges.
A row of ceremonial candles and a bag of potting soil lay nearby, photos reveal.
Experts on Sunday said the elements are featured in the ceremonies of a number of occult groups.