LET THE NEWSLEADER KNOW
THAT YOU DON'T LIKE THEIR
CENSORSHIP 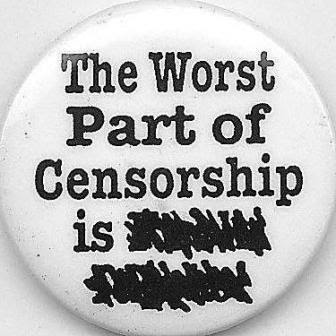 Regular readers of this blog will remember that I sent a Letter to the Editor of the Staunton Newsleader.
It started....
In the past, I had thought the Newsleader editorial board was staffed with a few well intentioned liberal-leaning journalists. With Tuesday's editorial I realize I was wrong. The board is made of some full time Democrat Party Apparatchiks.

Well today I have proof. They left out the last two paragraphs of my letter (See what they left out below).
I guess the Dems over at the Newsleader don't want any criticism of the Democrat Party or any praise for Tea Party folk.

Please let them know that you don't appreciate CENSORSHIP. Send in your own Letter to the Editor here or write the Executive Editor Davis Fritz at dfritz@newsleader.com


The worst part of the editorial was the last paragraph, concerning the comparison of the Tea Party movement to racism. The Democrat party is and has been the party that divides people by race. It is the home of Ku Klux Klanner Robert Byrd. It is the party of Jim Crow and Black Codes. It was Democrat Sen.Harry Reid who called President Obama " a light skinned" man without "a negro dialect". President Clinton said that President Obama would be fetching coffee for him and Ted Kennedy.

The very first Black, Mexican, and female members of Congress were all Republicans. It was the first Republican President who sent Americans to die to end the evil of slavery. It was a Republican who wrote the Emancipation Proclamation. It was Democrats who filibustered the 1964 Civil Rights Acts. It was Republican Senator Everett Dirksen wrote the language for the 1965 Voting Rights Act and the 1968 Civil Rights Bill. A. Phillip Randolph, a Republican organized Republican Dr. Martin Luther King Jr's March on DC for his famous "I have a dream" speech. It is the Republican Party that wants people to be judged by the content of their character, not the color of their skin.