A Little Cop Lingo for Civilians 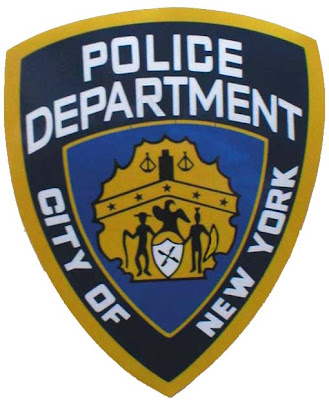 The Hairbag's Guide to NYPD lingo on 'The Job'
BY John Lauinger — Sunday, February 28th, 2010 ‘The New York Daily News’

NYPD cops may wear blue, but their street-hardened lingo is far more colorful.
"Slap the bracelets on that perp!" one cop may bark at a partner amid the adrenaline-fueled rush of making a collar.
Anyone who has watched a little "Law & Order" or a crime movie or two knows "bracelets" are handcuffs and "perp" is short for perpetrator of a crime.

But most cop lingo rarely makes it beyond the stationhouse (The House) or squad car (RMP). Ever been to "The Farm?" Hopefully not - that means rehab.
Borne of solidarity and fraternity, the gritty dialect spoken by those who keep the city safe is one of the defining characteristics of life in the NYPD - a gig officers refer to as simply "The Job."

"It is part of the lifeblood of the department because the department relies on communication," said Mike Bosak, a retired sergeant and an unofficial department historian.
Cop-speak is a point of pride among officers, a key element of NYPD style and, as is particularly true of numeric "radio codes," a way for cops to communicate so civilians won't understand.
For outsiders, "a lot of it goes over your head or you don't pick up the nuances or in-between meanings," Bosak said, "but guys on 'The Job' pick up on it right away and understand."

The radio command "10-4," meaning "acknowledged," has established itself in the vocabularies of many civilians. Others, not so much - like "10-98" (back on patrol), "10-30" (robbery in progress) and the urgent "10-13" (officer needs assistance).
Then there's the favorite, "I'm going 63." It's short for "10-63" - a meal break. "That's the most popular - they gotta eat well," a retired officer said.
There is no shortage of sarcastic lines, such as "bag of s---" - what a detective might mutter in reference to the hopeless case he or she has just drawn.
And then there are put-downs aimed at outcasts. A cop who is afraid to go on patrol is derided as a "housemouse," for example.
Most professions develop jargon, so it's not unusual that cops would do so, especially given the rigors of a job where one can be both loved and hated, said Jim Curran, a professor at John Jay College of Criminal Justice.
Curran, a former city cop, said he doesn't think cop speak is rooted in a conscious desire to be different. "It's just a gut-level thing that emerges in an isolated in-group," he said. "They are on their own version of the Galapagos Islands."
But cop lingo is very localized, and a word that means one thing within the NYPD can have a vastly different meaning elsewhere, said Tom Reppetto, a retired detective commander with the Chicago Police Department and an author.
"One day I was out in L.A. and I heard a cop say, 'Yeah, I stopped him and I shook him down,'" Reppetto recalled.
"What he meant was: 'I stopped the guy and checked him for weapons,'" he explained with a laugh, since in New York and Chicago, shaking down a perp means asking for a bribe.
- - - -

Glossary of some NYPD lingo

Back in the bag: An officer who is demoted from a plainclothes to uniform detail

Bounced: Removed from a unit

Cocktails: Manhattan detectives are fond of this term for getting drinks

Detail: Special assignment. Can be for a day like a parade, or a special unit like Street crime

Flopped: Bounced out of a detail

Fly: to move from one command or detail to another

Gentleman: What cops call a stand-up boss. Top commanders, however, sometimes think this means the boss is a pushover who doles out too much OT

Hairbag: An old-timer who who knows a lot or more likely a rookie who thinks he knows everything

Housemouse: A cop who is afraid to leave the station house and go on patrol; a sissy

It is what it is: A euphemism for a screw-up with political overtones

In the wind: At large, said of a suspect

The Job: Working at the NYPD

Job: A radio run or assignment

Loo: Friendly term for a lieutenant

On the arm: Provided with no cost such as a coffee from a store

Perp: Perpetrator of a crime

Road Soda: A Beer for the road

The Squad: Beat cop’s term for a precinct detective squad

The job is on the level: Sarcastic phrase meaning the job is unfair

If you are interested in an NYPD forum that uses lingo, jargon, etc try NYPD Rants
Posted by Unknown at 11:53

Email ThisBlogThis!Share to TwitterShare to FacebookShare to Pinterest
Labels: Police