54 years ago today, Rosa said NO 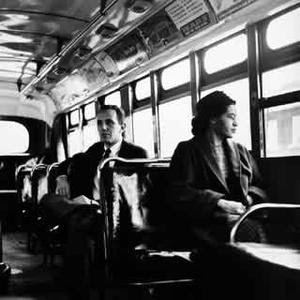 In Montgomery, Alabama, seamstress Rosa Parks refuses to give her bus seat to a white man and is arrested for violating the city's racial segregation laws, an incident which leads to the Montgomery Bus Boycott.
On December 1, 1955 in Montgomery, Alabama, Parks, age 42, refused to obey bus driver James Blake's order that she give up her seat to make room for a white passenger.

In 1900, Montgomery had passed a city ordinance for the purpose of segregating passengers by race. Conductors were given the power to assign seats to accomplish that purpose; however, no passengers would be required to move or give up their seat and stand if the bus was crowded and no other seats were available. Over time and by custom, however, Montgomery bus drivers had adopted the practice of requiring black riders to move whenever there were no white only seats left.

So, following standard practice, bus driver Blake noted that the front of the bus was filled with white passengers and there were two or three men standing, and thus moved the "colored" section sign behind Parks and demanded that four black people give up their seats in the middle section so that the white passengers could sit. Years later, in recalling the events of the day, Parks said, "When that white driver stepped back toward us, when he waved his hand and ordered us up and out of our seats, I felt a determination cover my body like a quilt on a winter night."

By Parks' account, Blake said, "Y'all better make it light on yourselves and let me have those seats." Three of them complied. Parks said, "The driver wanted us to stand up, the four of us. We didn't move at the beginning, but he says, 'Let me have these seats.' And the other three people moved, but I didn't." The black man sitting next to her gave up his seat. Parks moved, but toward the window seat; she did not get up to move to the newly repositioned colored section. Blake then said, "Why don't you stand up?" Parks responded, "I don't think I should have to stand up." Blake called the police to arrest Parks. See more here
Posted by Unknown at 10:45