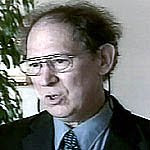 
In the May 1978 episode "The Coming Ice Age," DR. STEPHEN SCHNEIDER says....
Can we do these things? Yes. But will they make things better? I'm not sure. We can't predict with any certainty what's happening to our own climatic future. How can we come along and intervene then in that ignorance? You could melt the icecaps. What would that do to the coastal cities? The cure could be worse than the disease. Would that be better or worse than the risk of an ice age?
H/T Newsbusters