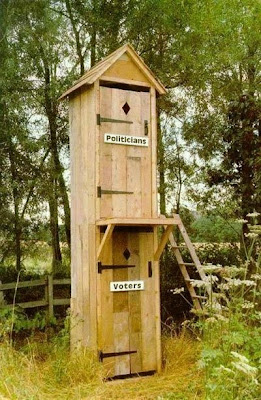 What are they worried about in DC?
17.1% Unemployment??
Terrorism in Times Square??
Battles in Afghanistan???
Iraq????

NOOOOOOOOOO ! ! ! !
The House Oversight and Government Reform Committee held hearings Wednesday on the "Potty Parity Act,"
They have nothing better to do in DC???

A bill that seeks to address the unequal number of restroom facilities for women in federal buildings.It is a law requiring at least a 1-to-1 ratio for toilets, including urinals, in women's and men's restrooms.Supporters of the bill say women forced to wait in long restroom lines are at risk of health issues, including abdominal pain, cystitis and other urinary tract infections.
Rep. Steve Cohen, D-Tenn.states,"The fact is, it's not a joke. Not only is it not a joke to women, it's not a joke to men who go with the women who have to wait while they're standing in line," he said. "It's also politically very popular. It's the right thing to do and it's catching up with the cultural lag in our society."
Posted by Unknown at 16:33