Obama: I will trade you one Lieberman, a second round draft pick, and a player to be named later. 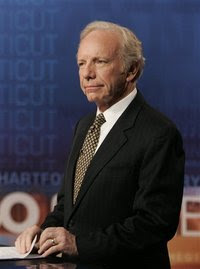 A source at the White House for the president's meeting with Israeli Prime Minister Benjamin Netanyahu reports that Obama ended the event with a modest proposal for the domestic politics of both men.

At the meeting's conclusion, the two leaders walked out to the adjoining room where the Israeli and American delegations were talking.

“So," Obama announced, according to the source in the room, "we’ve decided that we are going to trade our (Senator. Joe) Lieberman for their (MK Avigdor) Lieberman," referring to the independent American senator and the hard-line Israeli foreign minister.

Well President Obama, do you want this Lieberman???

In an Israeli cabinet meeting, Avigdor Lieberman reportedly proposed giving the Palestinians an ultimatum of bombing banks, gas stations, and commercial centers. On another occasion, he called for the execution of members of the Knesset who met with Hamas. He opposed an amnesty proposal by saying, “It would be better to drown these prisoners in the Dead Sea if possible, since that’s the lowest point in the world.” Then there was the comment that could be interpreted to suggest a nuclear strike on the Gaza Strip. He’s proposed requiring citizens to sign loyalty oaths or forfeit their right to vote, according to Jim Geraghty
Posted by Unknown at 11:14